Join us for our first 100 Outrageous Women Networking Event

Purchase tickets below at whatever level of support you can. All attendees will have the same experience. All proceeds benefit programs and activities at the Kansas City Irish Center. 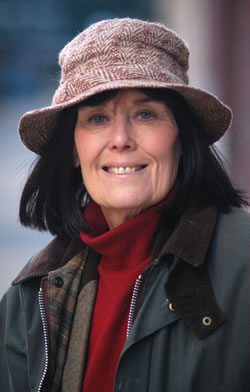 As an author and filmmaker, Mary Pat Kelly has told various stories connected to Ireland. Her best-selling novel Galway Bay (2009), called “pure magic” by Frank McCourt, is based on the history of her Irish-American family. Of Irish Blood (2015) continues the saga. She produced and directed award-winning PBS documentaries that include To Live for Ireland (1986) a portrait of Nobel Peace Prize winner John Hume and the political party he led; Home Away from Home: The Yanks in Ireland (1992), a history of U.S. forces in Northern Ireland during World War II with an accompanying book; and Proudly We Served: The Men of the USS Mason (1995), a portrayal of the only African-American sailors to take a World War II warship into combat, whose first foreign port was Belfast which won the CINE Golden Eagle. Her book of the same title was published by Naval Institute Press in 1995. She wrote and directed the dramatic feature film Proud (2004), starring Ossie Davis in his last film role and Oscar nominee Stephen Rea, based on the USS Mason story. Distributed theatrically by Castle Hill Productions and on television by Lionsgate, the film was selected by Tribeca and many other film festivals.

She wrote Martin Scorsese: The First Decade (1978) and Martin Scorsese: A Journey (1990); Good to Go: The Rescue of Scott O’Grady from Bosnia (1996); and a novel, Special Intentions (1997) based on her experiences as a nun on the West Side of Chicago. She is a frequent contributor to Irish America Magazine and has twice been named one of the Top 100 Irish Americans and one of the Top 100 Global Irish.

Mary Pat Kelly worked in Hollywood as a screenwriter for Paramount and Columbia Pictures and in New York City as an associate producer with Good Morning America (1976) and Saturday Night Live (1980-82), and wrote the book and lyrics for the musical Abby’s Song. College, attended NYU Film School, received her PhD from the City University of New York Graduate Center and has taught at City College and LaGuardia Community College.

Born and raised in Chicago, she lives on Manhattan’s Upper West Side with her husband, app developer Martin Sheerin from County Tyrone.