Amongst Women by John McGahern 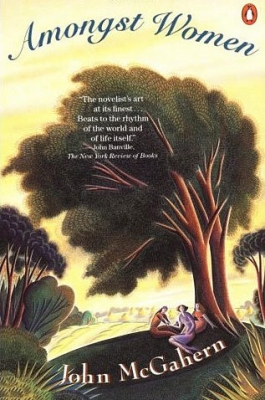 The novel is set in County Leitrim in the rural midlands of Republic of Ireland. The story spans a period of twenty years in the middle of the twentieth century. It centres on Michael Moran, patriarch of the Moran family and a former IRA member who was an officer and guerrilla fighter in the War of Independence and the Irish Civil War in the 1920s. Although Moran is a well-respected member of his community and a devout Catholic, there is a cruel, violent, and controlling side to his character. He dominates the lives of his second wife, Rose, and his five children. His children strive to establish their own lives while remaining loyal to the family. Most of the story is told through the use of flashbacks, as Moran’s daughters attempt to recreate Monaghan Day for their elderly and depressed father, because it was the day when he always seemed to be at his best.

John McGahern (12 November 1934 – 30 March 2006) is regarded as one of the most important Irish writers of the latter half of the twentieth century.

Known for the detailed dissection of Irish life found in works such as The Barracks, The Dark and Amongst Women, The Observer hailed him as “the greatest living Irish novelist” before his death in 2006 and in its obituary the Guardian described him as ‘arguably the most important Irish novelist since Samuel Beckett’.