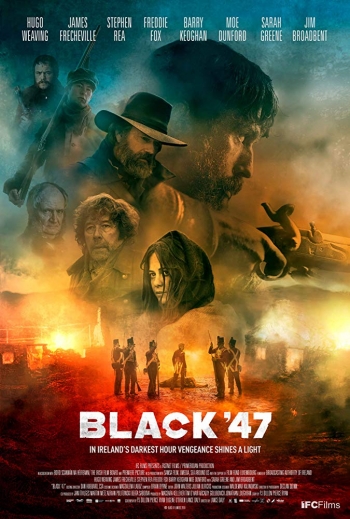 The Kansas City Irish Center is presenting an encore showing of the feature film “Black 47,” a story of revenge and redemption during An Gorta Mór (The Great Hunger). The film is set in 1847 Ireland during the height of the Great Famine. It stars Hugo Weaving, Jim Broadbent, and Stephen Rea alongside James Frecheville, Freddie Fox and Barry Keoghan.

“Black 47” is a feature-length adaptation of the 10-minutes Irish language film (with English subtitles) “An Ranger,” which will also be shown.

We are pleased to partner with the Fr. Bernard Donnelly and Padraig Pearse Divisions of the Ancient Order of Hibernians for this special presentation.

The History: The Great Irish Famine, which raged from 1845-1852, reduced the island’s population by 25% in less than 5 years – with a million deaths from starvation and fever and the forced emigration of a further million – and creased a decline that would see total population halved over the next half-century. It is regarded as the single greatest social disaster of 19th Century Europe. The Great Famine is the defining event in modern Irish history and its memory remains deeply embedded in the Irish consciousness.

Movie Synopsis: One man’s ruthless pursuit of justice plays out against the darkest chapter of Irish history in this riveting revenge thriller. In 1847, battle-hardened soldier Feeney (James Frecheville) deserts the British army to return home to Ireland, where he finds his country ravaged beyond recognition by the Great Famine. When he discovers that his mother has died of starvation and his brother has been hanged by the British, something snaps, sending Feeney on a relentless quest to get even with the powers-that-be who have wronged both his family and his country. There is only one man who can stop Feeney’s bloody crusade: disgraced British army veteran Hannah (Hugo Weaving), whose own loyalties may be more complex than they appear. Personal bonds and shifting allegiances cause both men to question their motives, as they are tested to the limit by the hellish landscape of “the Great Hunger.”

NOTE: This movie is rated R for violence, some disturbing images and language. Length: 96 minutes.