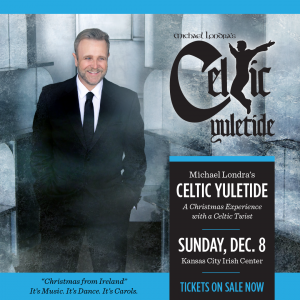 Emmy® nominee, Michael Londra, the Irish singer best known as the voice of Riverdance on Broadway and for his own US TV special, “Beyond Celtic”, presents an evening, bringing you “Christmas from Ireland” told in song, dance and the festive stories of his youth.

The evening features traditional, heartwarming Irish carols like Winter, Fire and Snow and Gaelic versions of Christmas songs you will love such as “Oiche Ciuin” (Silent Night). Michael will also sing Celtic songs of a new Ireland including his own popular carol “Beyond the Star” recorded and performed by choirs worldwide. The famed tenor sings many carols more familiar to international audiences like O Come Emmanuel and The First Noel but sung in a Celtic more traditional style by one the “greatest Irish singers of our time”.

Irish musicians join Michael onstage to perform age-old Celtic airs on the haunting uilleann pipes, fiddle, low whistles and the national drum of Ireland, the bodhran. They thrill the audience with their own frenetic traditional jigs and reels. The musicians are some of the most popular traditional players in Ireland, playing festivals and concerts throughout the year.

Rounding out the evening are the breathtaking Celtic Fire dancers, built from Michael’s connections to Riverdance. They perform traditional and modern dances that reflect the two worlds that Ireland lives in. The dancers are some of the best in the world, performing with Riverdance, Lord of the Dance and many more productions but come Christmas they present breathtaking steps especially choreographed to celebrate the season and dances traditionally danced during the holiday season.